It is our mission to cultivate and educate the new art collector. 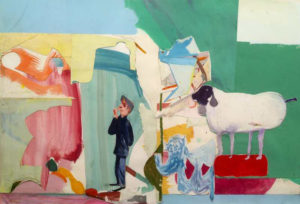 Whether you’re a novice, looking to purchase your first painting or sculpture, or a seasoned art-lover building a collection, at Collector Circle, we understand the need for high quality advice, education and personalized service. Our passion ans expertise will help you navigate the vast world of art.

We work with a relatively small number of forward-looking collectors, providing ad-hoc services and information as part of our overall relationship. Our commitment to research allows us to discover and monitor the ever-changing landscape of the art world and give our clients an accurate analysis of the market, identifying and securing the most appropriate artwork for them.

Great artists enhance the visionary process.
From the inception of Collector Circle, Inc in 2002, we have championed young contemporary artists. Through the years of collecting and working in the art world we have developed a distinct vision for talented emerging artists who push the edges with a modernist approach with their own signature style. We have purchased artists at the beginning of their careers before they were known or appreciated and watched their works steadily rise in value.

Join our group of prize-winning collectors, who remind their friends that they bought a work of art that was cheaper than their soon-to-be-obsolete computer!

The following article originally appeared in the December 1, 2012 issue of Barron’s.

Marcia Eitelberg was a real-estate agent and mom out on Long Island when, 30 years ago, she decided to start collecting contemporary art. She took her $10,000 in savings to art dealers; they told her she could buy, possibly, a decent print at that price. “I didn’t believe it,” she says. “I knew someone bought a Picasso for $500. Why couldn’t I?”

Every evening, while her husband watched TV, Eitelberg flipped through art books, trying to educate herself. Around 1982, an art-appreciation class she took at the New School visited an art gallery; Eitelberg spotted a work of a Marlboro-like cowboy. Eitelberg used to smoke Marlboros, liked the look, and so paid $1,200 for the Richard Prince print. It was recently appraised by Phillips de Pury at $400,000.

The self-taught Eitelberg over the years developed an uncanny eye for buying up-and-coming artists before they were in the majors. On the walls of her one-bedroom apartment on West End Avenue in New York are works by John Currin (she paid $3,500), Gerhard Richter ($13,000), Anselm Kiefer ($5,500), and Sigmar Polke ($13,000). She bought a Jim Hodges in the early 1990s for $2,300  and sold it in 2008 for $800,000. Eitelberg says about 85% of her acquisitions have appreciated. Her biggest mistake was Yek, a rising artist whose work she acquired for $1,800. “He was doing very well,” she says, until he switched dealers and then “just disappeared.”

Eitelberg now runs Collector Circle, an art-appreciation group and dealership for those who are “young in spirit” and want to similarly develop a talent for picking new artists. Last month, she hosted a soiree in her and her husband’s apartment; she had the fast-rising artist, Huma Bhabha, come over for some franks-in-a-blanket and wine. Standing in her apartment is a stunning Huma Bhabha sculpture, a rough-chiseled figure emerging from what looks like wood but is in fact bronze. At $60,000, it’s Eitelberg’s most expensive acquisition to date.

Who else is Eitelberg collecting these days? Brendan Fowler, Heather Rowe, Daniel Hesidence, Jaye Moon, and Sara Vanderbeek. Up-and-coming artists “are still out there,” she insists. And always will be. When Eitelberg finally met Richard Prince at a party a few years ago and told him about her early acquisition, the artist politely thanked her for buying the work when he was “poor and needed the money.” That, she says, is also the point of supporting artists early in their careers. “If you do invest in art,” she says, don’t just flip works in the secondary market, but do so in a way “that the artist gets something back.”